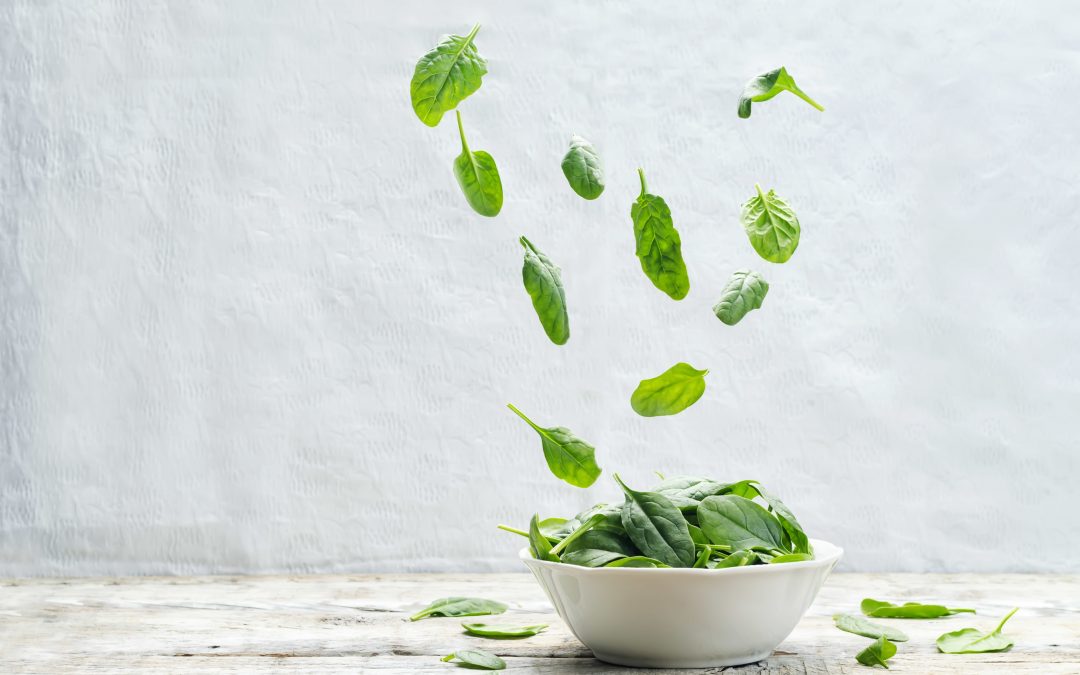 Benefits (and Risks) of Juicing Spinach

Like other dark leafy greens, spinach is packed with a number of nutrients and powerful antioxidants.

The average serving of spinach is about 50 grams, or about 2 cups of loosely packed spinach. As posted to the USDA FoodData Central database, this serving contains the following nutrients:

The same serving size also contains important minerals and nutrients, such as:

Many of the benefits of juicing spinach surround these helpful antioxidants.

May strengthen the bones

Raw spinach is a great source of vitamin K. This helps create a specific protein in the body called osteolac, which is responsible for keeping the calcium within the bones strong.

Additionally, spinach provides other bone-healthy compounds such as vitamin D, potassium, and magnesium.

May strengthen and protect the eyes

Spinach contains a number of helpful antioxidants. Two of these antioxidants, zeaxanthin and lutein, are stored in the macula of the eyes, which helps to shield the eyes from damage due to light.

Empowering the macula by eating leafy greens that contain these antioxidants may protect from macular degeneration and keep the eyes healthy.

Additionally, spinach is high in other nutrients that are important for eyesight, such as vitamin A.

Spinach is a high source of natural nitrates. In the body, these naturally occurring nitrates may help dilate the blood vessels, which could reduce blood pressure.

This may also have to do with the high levels of potassium and other heart-healthy minerals in spinach.

May fight oxidative damage and disease

As a study posted to Food & Function notes, overwhelming research shows that diets rich in fruits and vegetables protect against common chronic diseases, such as obesity, cancer, and cardiovascular disease.

Dark leafy greens such as spinach are of particular interest, as they contain an abundance of nutrients compared to their calories.

For spinach, in particular, compounds from spinach help block damage from oxidation and scavenge free radicals.

This may help fight oxidative damage in the body and fight against common chronic diseases.

Another benefit to juicing spinach is the fact that the spinach is raw when consumed. Cooking spinach at high heats, such as boiling spinach makes it more palatable and helps it blend well with other foods.

Unfortunately, many times cooking spinach also breaks down some of the key nutrients and antioxidants in the plant.

Eating the same amount of spinach raw, or juicing the spinach, will actually deliver more of the nutrients and antioxidants already in the plant compared to cooking the spinach

Leafy greens such as spinach do provide a good amount of fiber to the diet. Juicing the plant removes much of this fiber. However the impact of this may be lower in foods such as spinach, with relatively low fiber and sugar compared to other nutrients.

Likewise, anyone who takes drugs for blood pressure should also talk to their doctor before adding large amounts of spinach juice to the diet.

Some people may not enjoy the leafy flavor of spinach juice on its own.

To help make the flavor milder, try adding a bit of apple, lemon, or celery to the juice. This can thin out the spinach flavor and make the taste overall more enjoyable. It also adds the nutrients from these other foods to the juice.

Spinach is packed with antioxidants and nutrients that help maintain and protect many systems in the body. Importantly, it is not a replacement for other factors, such as a healthy diet and exercise.

Anyone taking medications to control chronic issues such as blood pressure should talk to their doctor before adding spinach juice to their diet.

For most people, juicing spinach is a simple and direct way to get the benefits of spinach into the body.

Benefits (and Risks) of Juicing Kale

END_OF_DOCUMENT_TOKEN_TO_BE_REPLACED

Benefits (and Risks) of Juicing Ginger

END_OF_DOCUMENT_TOKEN_TO_BE_REPLACED

Benefits (and Risks) of Juicing Cucumber