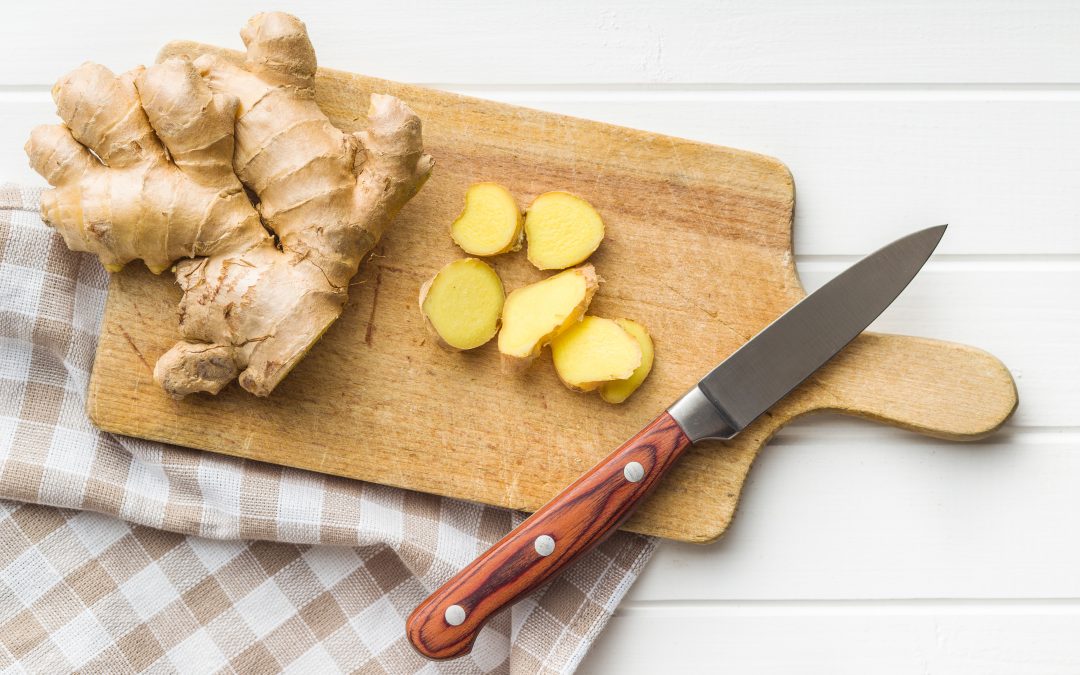 Benefits (and Risks) of Juicing Ginger

Ginger is a well-known root herb with many uses, used in traditional medicinal practices for thousands of years.

The impressive antioxidant profile in ginger makes it a favorite ingredient in juices as well.

Many of the benefits of juicing ginger come from the wealth of antioxidants and anti-inflammatory compounds in the root, which may also help a number of conditions.

Because of the depth of research around the herb, there is a lot to cover!

As data posted to the USDA FoodData Central indicates, there is not much to ginger on the surface. Each 100g serving contains:

Additionally, there are small amounts of other nutrients, such as potassium, iron, and trace minerals such as copper.

What ginger does offer, however, is a potent combination of antioxidant compounds, which provide many of the benefits associated with the plant.

Many of the potential benefits surrounding ginger come from potent antioxidant compounds. As a study posted to Foods notes, the herb is rich in active compounds including:

The majority of these antioxidants in ginger are gingerols, shoals, and parasols.

These compounds act as antioxidants in the body, reducing oxidative damage and preventing reactions from damaging free radicals.

These compounds also give ginger an anti-inflammatory effect, making it ideal for people who struggle with inflammation and as a preventative measure for inflammatory conditions.

May help combat many digestive issues

Ginger is revered in many traditional medicine systems as a powerful food for the digestive system. Western science supports this, mainly thanks to the antioxidant, anti-inflammatory, and antiemetic compounds in the root.

A review posted to World Journal of Gastroenterology notes that ginger helps with a few markers of digestion, including:

May empower the immune system

In general, increasing the number of antioxidants and anti-inflammatory compounds a person gets from their diet may help empower their body and improve their immune health. Ginger is one such compound.

As a study posted to the International Journal of Preventative Medicine notes, ginger has antioxidant and anti-inflammatory properties that help nourish the immune system and reduce the damage that leads to many illnesses.

This may make it an ideal herb to help empower the body’s own defense mechanisms.

May help with cognitive function

A study posted to Evidence-Based Complementary and Alternative Medicine found that healthy middle-aged women who took ginger over the span of 2 months had better working memory and overall cognitive function. Researchers noted this may have been to the antioxidant activity of ginger.

May help with weight loss

Ginger juice may also help with weight loss by keeping the body more satisfied after a meal. A study posted to Metabolism found that overweight men who consumed ginger tea burned more calories and had reduced feelings of hunger than those who did not.

May improve markers of cholesterol

A review posted to Critical Reviews in Food Science and Nutrition noted that in overweight populations, ginger consumption helped to improve the cholesterol profile of people who took it, increasing their good cholesterol levels.

May inhibit some cancer cells

Early evidence suggests ginger and its compounds may help inhibit some cancer cells. For example, a study posted to Advanced Pharmaceutical Bulletin found that a ginger extract helped inhibit a line of cervical cancer cells.

Studies such as these provide very early research to build support around but are nothing to make broad claims about. With this said, adding ginger to the diet may increase the amount of these healthy compounds in the body.

Though used for a number of issues, there may be some potential side effects from juicing ginger to be aware of.

Some people are also allergic to ginger and should avoid juices with ginger in them completely.

Ginger juice may also interact with some drugs, especially at higher doses. Large amounts of ginger may thin the blood. This could make them interact with other medical blood thinners such as Warfarin. Anyone taking prescription drugs that thin the blood should talk to their doctor before using ginger juice.

The best way to get ginger juice

Though a number of companies and stores offer bottled ginger juice, the juice and its benefits may be best when it is fresh, as the compounds do not have time to react with the environment and become less potent.

Juicing fresh ginger in the home and adding it to other juices such as celery or apple may be the simplest, most effective way to deliver ginger to the body.

Benefits (and Risks) of Juicing Kale

END_OF_DOCUMENT_TOKEN_TO_BE_REPLACED

Benefits (and Risks) of Juicing Cucumber

END_OF_DOCUMENT_TOKEN_TO_BE_REPLACED

Benefits (and Risks) of Juicing Beets